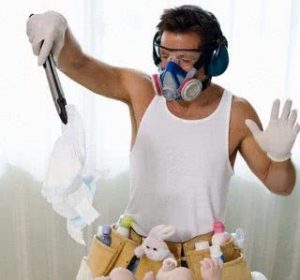 What is a disposable nappy made of? What happens to it after it hits the bin? And how much will it cost you?

There are loads of info about the benefits of using a cloth nappy vs the disposable nappy we have come to value so much. In no way is this another attempt to convert you to a more sustainable environment-friendly alternative. But it’s interesting to consider this confounded item that provides key logistical support in transferring foul matter from baby bum to rubbish bin.

You’ve had your fill of playing paper-rock-scissors to see who is changing the next nappy. And if you had multiple children, then you would die a happy man if you never see another nappy.

Let’s face it, it’s not just the smell. It’s not the act of wiping your kid’s bum, either. Though, it does contribute to the dislike. It’s the sheer volume of nappies that gets you down. It never ends. The bins are full of it, the car is stacked with it, each room has a steady supply of it.

Its omnipresence transcends the physical realm. It’s on every shopping list you look at. After having kids, nappies find itself at the forefront of household decision-making. Travelling somewhere? Nappies. Having frothies with your mates? Nappies. Dropping kids at school or the in-laws? Nappies. Running away to the dessert where you hope to die alone? Nappies.

You keep the house stocked because you know what will happen if you run out. I don’t need to explain the consequence of going nappy-free. The idea alone is dreadful, so you close your eyes and buy another pack.

The cost, just because.

Ok, so you can’t let it go. We totally understand. It’s part of that masculine curiosity that often gets men into trouble. So, let’s do the math. Just because.

With the help of Earth911, here are some numbers to give you a rough idea:

Babies wear nappies for 2-3 years. At infancy you should change nappies about 12 times a day. Though this amount gets less as the weeks roll on, a toddler still uses about 4-6 nappies a day. By taking an average of 8 nappies, it amounts to 2920 nappies each year and a total of 7300 nappies for a period of 2.5 years, if they are potty-trained by then.

With the cursed application of hindsight, if I could go back, I would have popped a 50-cent piece into a jar for every nappy used. That could have contributed to schooling. Just a thought. Use it. Don’t use it.

Do nappies really have a negative environmental impact?

According to the South Australian government’s Zero Waste SA, about 800 million disposable nappies end up in Australian landfills every year. At the very least, these nappies will take 200 years to break down. Not to mention the methane released from the mountain of crap hiding inside. USA and European stats are not dissimilar.

But why do nappies take so long to decompose?

It has a lot to do with what they are made of. To be painfully brief, a nappy has three layers, which contain the following:

– A petroleum based plastic threaded material.

– An absorbent core, largely made up of wood pulp (which had been bleached excessively to look white) and chemical sodium polyacrylate crystals.

– An inner layer of polypropylene and fragrances.

This is not even looking at the glue on the tabs, the ink on the design and the plastic packaging.

How difficult is it to make the switch to cloth nappies?

I promised this was not an attempt to convert the 90% of households using the disposable nappy. But the reality is that at some point, things will have to change. Much like the quest for non-fuel transport alternatives, there is a demand to reduce plastics and toxins from all commerce and industries, nappies being among the culprits.

Environment-conscious supermarket chains are already in talks to limit conventional disposable nappies. Governments are coming under fire for not taking measures or for encouraging initiatives to find alternatives. In time, this will take effect.

Most men tremble and shake at the thought of cloth nappies, but civilization has come a long way since then. According to Jenna from Bubblebubs, cloth nappies is much easier on the pocket and not nearly as messy as it used to be.

“Gone are the days of big squares of terry towelling and nappy pins,” she muses. “Today’s cloth nappies are easy to use and easy to wash.”

For those not sure what to expect, here is an idiot’s guide to modern cloth nappies. It’s so fool-proof, even daddies can understand it.

We do a 50/50 cloth-disposable nappy option. Works well for us. Might be worth giving it a try.

James Fouche is an author, travel writer, entrepreneur and silly daddy of three. He also writes about parenting and wine, whenever his kids allow him to.

This article first appeared in The Brag Dad Australia.

Stunning day at the @georgeoldcarshow checking out

Any writer will tell you that when you are plottin

This is what weekends are meant to be like. As par

You better watch out, you better not cry... #chr

You have Successfully Subscribed!